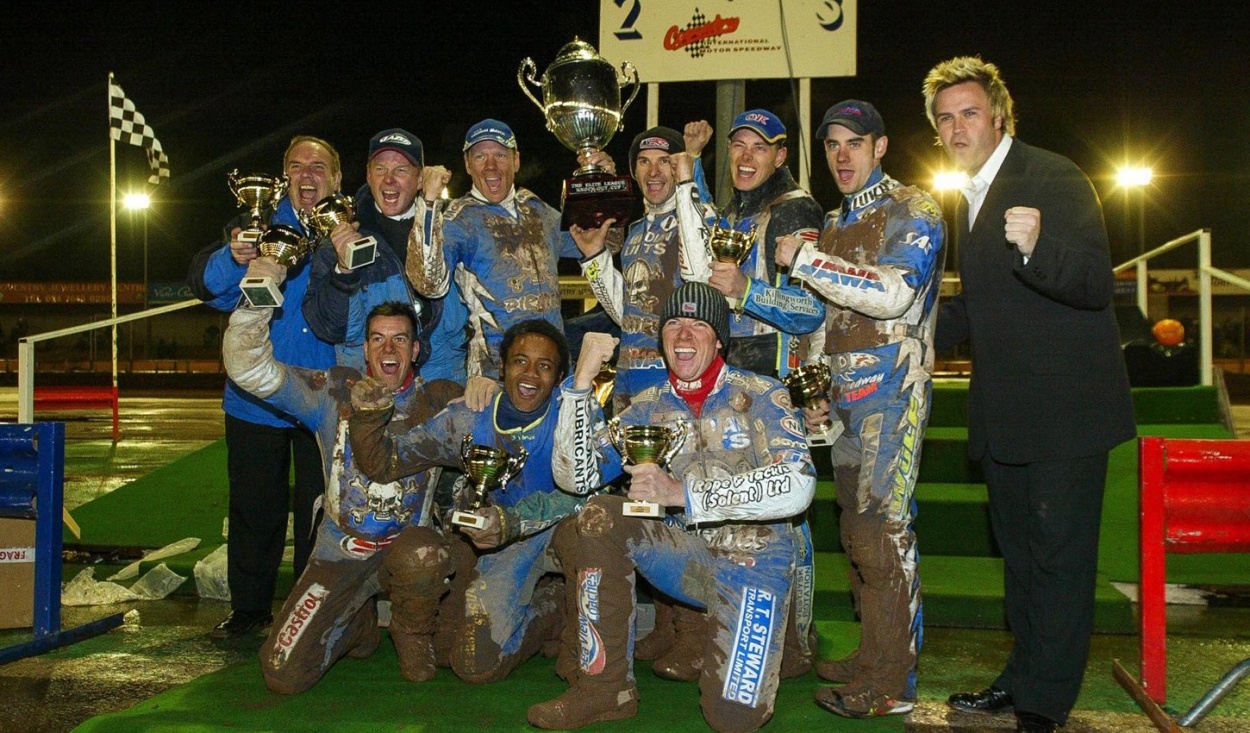 The year 2003. Poole had just won their first top flight championship for nine seasons, beating Coventry in the play-off final and the two sides were destined to meet again in a dramatic Knockout cup final.

En-route Poole had eliminated Eastbourne (96-66) and then Oxford (98-82) whilst the Bees were forced into a first round replay against Peterborough after both clubs had registered 52-38 wins on respective home soil. Coventry were far more dominant second time around going through 107-73 to set up a semi-final tie against Wolverhampton, and they scraped through that 91-88, turning round a seven point first leg deficit.
And the Bees had another deficit to contend with in the final as Poole took a marginal 6 point advantage into the second leg at Brandon on Saturday 25th October.
On a wet, dreary night in the Midland though, the Bees wasted little time in wiping outside the the deficit, charging into a 72-58 aggregate lead after six heat advantages from the first seven heats, three of a 5-1 status and an equal number of 4-2's all following an opening shared heat.
Only the most optimistic were significantly buoyed when Bjarne Pedersen and Leigh Adams rode out a heat 8 5-1. After all, just seven heats remained and at that stage the other five riders had accumulated just eight points between them from ten rides!
But back-to-back race wins from Tony Rickardsson certainly helped Poole stem the tide and then Pedersen featured in two successive 4-2 advantages, the first with Adams in heat 11 and then with Mark Loram in twelve. The aggregate now showed 83-77, the gap back to single figures and Loram and Rickardsson were out together in heat 13.
With Andreas Jonsson taking the victory the Bees fans were once again sounding extremely confident that the cup was destined to be under their care, whilst back in the pits the Pirates were facing the stark facts that they had to get first and second in both the remaining two heats if they were to secure their second piece of silverware at this stage.
A disqualification for Ryan Fisher cost the home side dearly, Loram and Garry Stead delivering the first part of the final two heats' demand and so the burden fell on the shoulders of Adams and Rickardsson to try and lead home both Jonsson and Lee Richardson. Was it possible that inspite of trailing at one stage by 14 aggregate points the Pirates could still pull victory from the jaws of cup defeat?
Well, there was no better pairing to call on than the Pirate duo and they proved their quality with a dramatic four laps, yelled on every wheel turn by the vociferous travelling support.
A key part of Pirates' history was in the making, and less than a week later the treble was secured when the Pirates won the British League cup with a home win over Eastbourne.