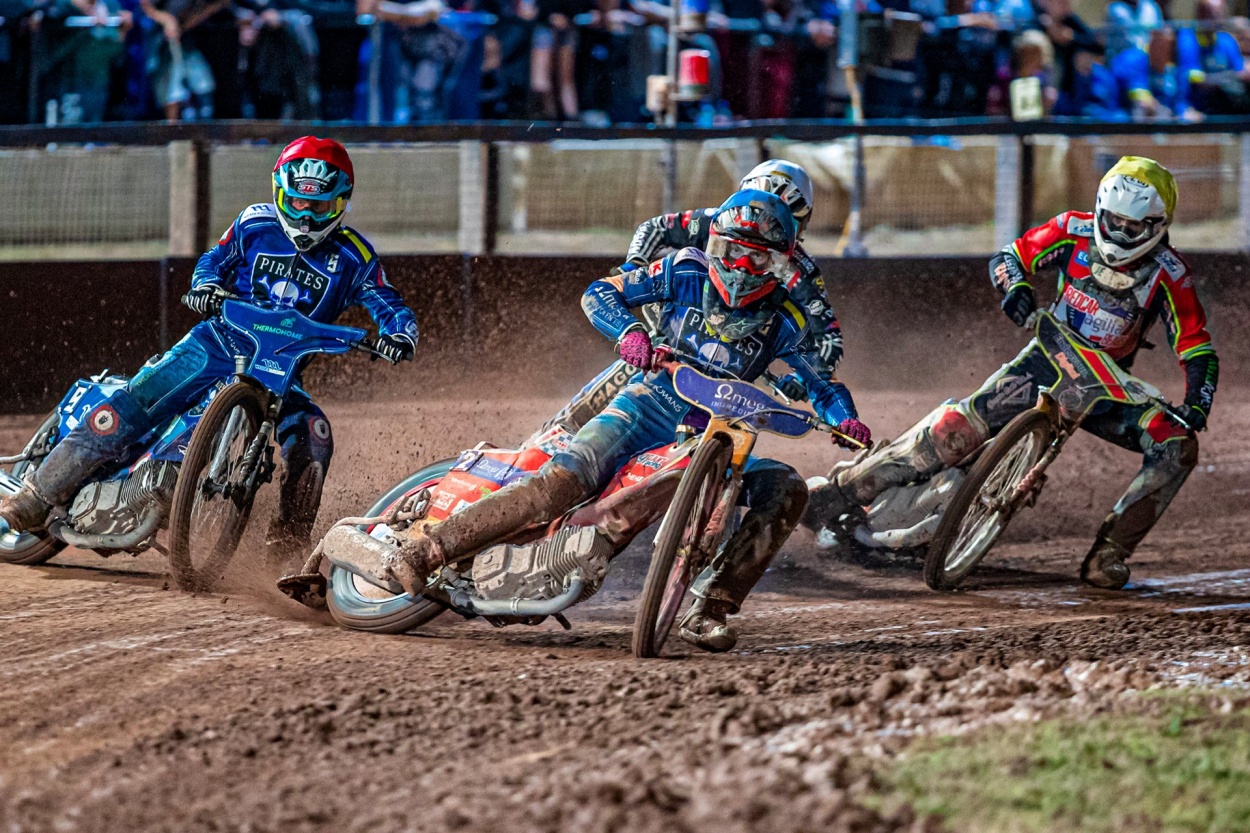 An outstanding performance from the Pirates in this first leg of the Knockout cup has given them every hope of defending the trophy they won last season..

It seemed that whenever the Pirates needed a steady hand on the rudder as they navigated their way to a fifth successive victory,  they had Able-bodied seaman Ben Cook on hand.

His pacey opening ride, recording the only sub-54 second time of the night, set up the perfect start for the Pirates as Captain King was shoring him up well. Nathan Ablitt produced a classy move on Jason Edwards to ensure the Pirates maintained that early advantage,  as Kyle Newman fended off Zach Cook well. Problems beset the Bears in heat three when back marker Jordan Jenkins ran into his own Captain, Charles Wright. But as often happens in re-run situations, it must be someone's law, the Pirates were less effective second time of asking. Drew Kemp missed the start totally, Steve Worrall not so, but had no answers to a masterclass ride from Wright.

If that was a good move, it had nothing on the brilliance of the battle between Lewis Kerr and Richard Lawson that ensued in heat four. Lawson had only been at the track for less than fifty minutes after a late arrival, but he managed to come out on top of a shoulder to shoulder battle. Worth a mention though was the presences of Nathan Ablitt who gated well and had pole position coming out of the second turn and although swept aside by the two more senior guys who looked adjoined at the hips, he still dug in well and put plenty of distance between himself and Jason Edwards.

Wright was again shining for the Bears, managing to depose Ben Cook but there was no real damage done in heat five as King backed up in third. Erik Riss was quick to fill a huge gap left by Lawson as they entered turn two and had the clean beating of the Poole man, but for some reason, resolutely demonstrated a flurry of petulant behaviour as he first refused to shake hands with Lawson at the end of the heat and then couldn't resist the desire to chase him into the pits, dumping his bike outside in the process.

Kerr and Newman delivered a huge result in heat seven as they outgated Poole's Wolverhampton pairing of Worrall and Kemp, the resulting 5-1 putting them within two points of the Pirates. Renowned for late comebacks, were the Bears about to turn the tables?

Gary Havelock correctly decided to stand Ablitt down from heat eight, a hard call given the effort Nathan had demonstrated in his first two rides, but a necessary one as it brought about 'Cookie Time' and the brothers didn't disappoint as the commanded the heat and restored that six point advantage.

For much of heat nine it appeared the Pirates might edge further ahead as Lawson led, but Wright timed his final assault to sheer perfection, grabbing the three points from the clasp of Lawson, although with Zach Cook occupying third place it was again a 'no-damage' heat as far as the Pirates were concerned.

Drew Kemp was shining in heat ten but he locked up at the entrance to turn two and the pursuing Riss and Worrall had no option other than to run into him. In the re-run, Riss made all the running, Worrall not getting away too cleanly and had to work to pass Kasper Andersen to mitigate the heat score. Heat eleven saw Lewis Kerr make a mess of his approach around the second turn and Ben Cook wasn't going to hang around to say thank you, as he stormed up the inside to join King for another Poole maximum heat score.

Worrall eventually made a decent start in heat twelve but his determination to run hard round the outside ended in an uncomfortable fall. Partner Zach Cook gave a good account of himself as he chased Wright hard in the re-run but the Bears were able to celebrate their third heat advantage of the evening. Danny King delivered a true captain's ride in heat thirteen to protect Poole's six point adavantage before Zach Cook replaced Kemp in heat fourteen and proudly prevailed, Ablitt again very much in the hunt before trailing off a wee bit in the final lap and a half. That result though meant Poole would be heading into their home leg with a lead of some sort, few expected to conclude in seven points as the final race produced just two finishers.

King had battled his way to the front and was attacking turn two for the third time when he was dumped to the floor by running it too wide, a disappointing end to his night as he was on his third maximum heat score with Ben Cook, the rider that raised the bar of his ability even further when he made a superb re-run start and made the chasing Bears of Wright and Riss work hard, the latter overdoing things and falling. By the time the German remounted Cook was coming round for his final lap and Riss was obliged to pull up . The 3-2 was another point gained by Poole and the 48-41 victory well deserved and a perfect platform on which to defend the cup.